Blown out elastic isn’t fun but it doesn’t make a diaper completely useless.  With a little bit of spare time you can easily replace that old elastic and have your favorite diapers working like new.

The first thing you want to do is get supplies.  You’ll want a braided elastic that says it’s okay for swim wear.  I believe mine is 5/8 inch.  You’ll also need a seam ripper, some strong thread and a sewing machine (though it could be done by hand if needed).  I suggest having a back up seam ripper.  I broke two on the diaper in the video – though they were a couple of years old. 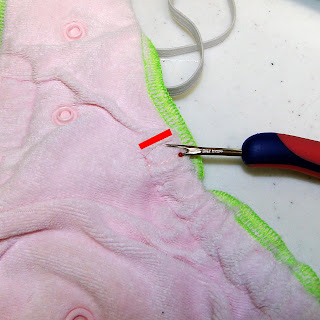 Get out the diaper to be repaired and locate where the elastic is tacked down.  You’ll want to cut a slit with your seam ripper – just above the two rows of stitching holding down the elastic. The spot is marked on the photo to the left in red.

Once you get that open you’re going to carefully use your seam ripper to undo the two rows of stitching that hold down the elastic.  There are a lot of tight, tiny stitches in there, so be careful.  I found that undoing the stitches from the print side of the diaper first helped, and then I was able to remove it carefully from each side of the elastic inside of the casing.

After you get the first side undone you’ll want to get out your new elastic and tack it to the old with a safety pin or straight pin.  If you use a straight pin be sure to keep the sharp end pointing away from the hole so that it doesn’t want to catch when you pull the elastic through in the following step. 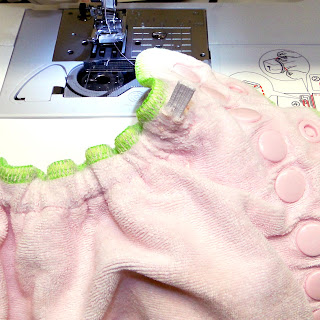 After you’ve secured the new elastic to the old, you’ll go ahead and undo the tacked elastic at the other end, just as before.  Once you’ve undone it, pull through the old elastic and the new.  Be sure that the new elastic is flat through the casing and go ahead and sew down your first end.  Be sure to leave a little elastic out at the end – as shown to the right. Now you can pull on the other end of the elastic to adjust it to the tightness that you want and tack down that end just as you did the first, leaving a little bit out at the end.

Next you’ll tuck the ends of the elastic into the slit you’ve made in the diaper and use a tight zig-zag stitch to close up the hole as seen below. 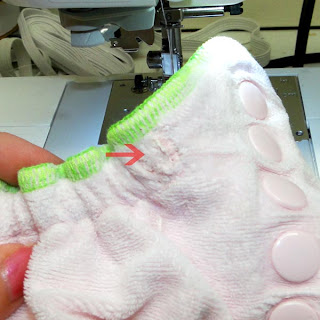 Repeat this process on the other side of the diaper.  If you measured the elastic that you used, go ahead and use the same size on the other side.  This was my first time doing this, so I just did it by feel.  Once I got to the next side, I ran my elastic through and tacked it down with a straight pin to see that it was even. 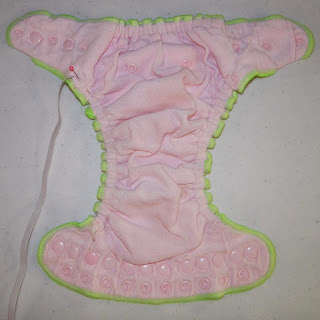 Tack down your other end, close up your holes and you are all done.  Marvel at your craftiness!

Founder of The Eco-Friendly Family, design geek, serial tanktopist, content creator, mother, coffee addict, & lover of fun. I am also a partner at Green Child Magazine & Put A Cup In It!

Written By
Amanda Hearn
More from Amanda Hearn
This simple idea is lovely as a centerpiece, and it’s perfect for...
Read More