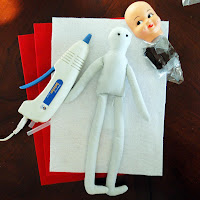 I was planning to buy an Elf, but I couldn’t find one locally and really didn’t feel like dropping $30 on one, so I decided to DIY and share the magic with you!

DIY Elf on the Shelf

Cost: Approximately $6 (This may be a bit more if you purchase the supplies online.)

The first thing you’re going to need are some supplies, so head to your nearest craft store and grab the following items from the doll section. 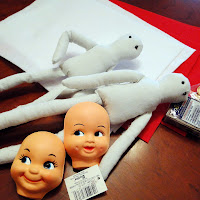 You will also need a hot glue gun, or you can sew it if you’re feeling spunky, though you will likely want some sort of glue for the hair.

The first thing I did was lay out my pieces and then cut out the neck section on my face so that it would fit nicely onto the muslin form.  These poseable forms have feet, and I wanted to stay to true elf form, so I cut them off (poor Elfie) and used some hot glue to stitch him back up.  Once his feet were ready to go it was time to start dressing my elf! 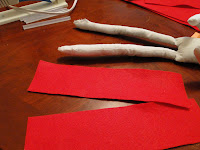 Dressing your elf is really simple.  Using long rectangular pieces of red felt, glue it to the leg.  I chose to have my seam run down the back of the leg.  Once it’s in place simply wrap the felt around and glue down the other end.  I found that making my piece a little wide was best, because then I could trim if needed, but be sure to have enough material as these doll forms aren’t perfectly uniform. 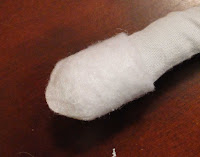 After the legs were covered, I moved on to the arms.  Elfie has white hands, so I put a tube of white up near his hands (for gloves) in the same fashion that I did the legs, but I filled the end with glue and pressed it shut as it dried (be careful! the glue is HOT).  Once the glue was cool enough (not totally dry) I cut the hand shape and pressed the ends shut fully.  Once both hands were done I covered the arms with red felt, just as I did the legs.    The body was the same idea except I used two rectangular pieces, glued the back on and then the front to wrap around his sides to hide the seams.  Easy peasy! 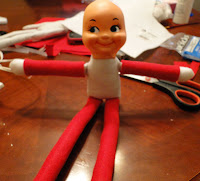 Next up was his hair.  This part I didn’t photograph because it really just requires a bit of playing with adult playdoh.  You can shape the Block of Sculpey Clay however you like, when you’re done pop it (the clay ONLY, not the head) into the oven for about 15-30 minutes at about 275°F (read the instruction on your package).  Allow it to cool and then glue it to your elf’s head. 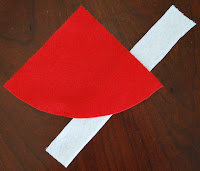 Once the hair is on you can add his hat!  Cut out a simple 1/3 circle in red and a long rectangle in white.  Glue your 1/3 circle into a cone shape and glue to your elf’s head.  I found that my elf needed some stuffing for his head to be more… well head shaped, so I used some cotton balls to fill in the gaps.  Add your white strip and then you can add whatever neck decoration you like.

All in all I think that our Elfie turned out pretty great! 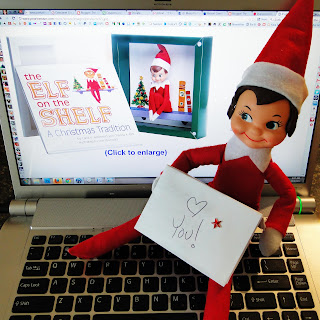 Don’t forget to buy or DIY your own elf to join in on all of the holiday fun with this cute creeper!

Founder of The Eco-Friendly Family, design geek, serial tanktopist, content creator, mother, coffee addict, & lover of fun. I am also a partner at Green Child Magazine & Put A Cup In It!

Written By
Amanda Hearn
More from Amanda Hearn
I used this detergent recipe on my diapers for about four years,...
Read More